The second generation Scarlett range is packed full of upgrades. New super-low latency* will bring confidence to your performance, letting you record and monitor with software effects in real time.

New metal volume controls and a sleeker red metal chassis underscore its improved industrial design, built to go anywhere. Scarlett USB audio interfaces also now operate at sample rates all the way up to 192kHz, and the input channels have evolved too.

The latest Scarlett mic preamp features a more even gain structure, so you can accurately set your levels, and the instrument input has also been completely redesigned so it can handle seriously hot pickups for recording electric guitar.

Focusrite have just announced the worldwide availability of its second generation of Scarlett USB audio interfaces — the number one selling range of audio interfaces in the world. One of the key improvements over previous designs is Focusrite’s fastest USB performance yet, with roundtrip latency measurements as low as 2.74ms (tested at 96kHz with buffer size of 32 samples). 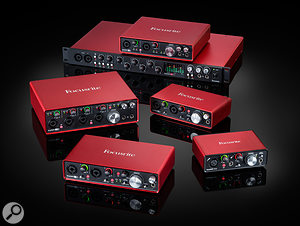 There are six interfaces in the range, as well as two studio pack bundles, from the two in, two out, single mic preamp Scarlett Solo up to the rack-mounted 18 in / 20 out Scarlett 18i20. The improvements are immediately apparent at first glance, with new metal gain controls and a sleeker red metal chassis underscoring a host of improvements to the product design. According to Focusrite, the latest Scarlett mic preamp now features a more even gain structure, so you can accurately set your levels, and the instrument input has also been completely redesigned with increased headroom so it can handle even seriously hot guitar pick-ups. Focusrite have provided analogue protection circuitry across both the inputs and the outputs, guarding the interfaces against unwanted power surges. The Scarlett range also now operates at sample rates up to 192kHz.

Following the announcement of an alliance between Focusrite and Avid, second-gen Scarlett interfaces will also ship with Avid Pro Tools First. Named the Focusrite Creative Pack, the exclusive offering features the free version of the industry-standard Pro Tools digital audio software, and 12 additional plug-ins, including Eleven Lite for guitar amp emulations and Tape Echo to bring the sound of classic analogue delays to mixes. Focusrite and Avid will continue to collaborate closely to ensure that all new Scarlett interfaces are compatible with each new version of Pro Tools, providing the best possible user experience. The joint commitment to testing and the inclusion of the exclusive Pro Tools First Focusrite Creative Pack with every second-generation Scarlett interface makes them ideally suited for Pro Tools. Also provided are Ableton Live Lite, Softube’s Time and Tone bundle, the Focusrite Red Plug-In Suite, 2GB of Loopmasters samples and more.

The bus-powered range of Scarlett second-generation interfaces is available immediately, with the Scarlett 6i6, 18i8 and 18i20 following later in June. The Scarlett range is Mac and PC compatible, working across all major DAWs.